In order to begin my experiment, I first needed to remove all of the rotted flesh from our corpse and determine if there was anything salvageable beneath it. This proved to be a more devilish task than I had, at first, imagined.

Although much of it was still viable, one entire side and several adjacent areas had been disfigured beyond recognition. The cleaning and preparation would require several days of grueling and resolute travail (with no certainty of a positive outcome) along with the application of new and untested techniques that would, no doubt, shock my colleagues.

To begin with, the stench was overwhelming. The cadaver had been found lying on a pile of old blankets that were apparently being used as a commode by a colony of rats infesting the basement where it was discovered (along with a long dead and desiccated member of their tribe). The flesh had absorbed and retained much of the excreta that had saturated those rank and tattered bed cloths. My awareness of that fact, along with the stench of rot and decay emanating from the remains, gave me cause to wretch in disgust and forced me, several times, to rush from the laboratory gasping for the smell of clean fresh air. Were it not for my devotion to this family and their cause, I would have abandoned the project at that point. I chose, however, to continue, despite my misgivings, and after suffering many hours of torturous endeavor was finally able to clean and disinfect the body.

Upon doing so, I discovered that much of the skeleton was grossly disfigured and in need of major reconstruction. Although I knew that some of it could be regenerated by grafting on new material, other segments were completely destroyed and would have to be replaced with scavenged body parts.

My assistant and I set about the task of preparing our laboratory and assembling the special equipment that would be required before beginning surgery. Ultimately, we devised a diabolical scheme to re-join all of the critical parts and I will reveal our method (and our madness) in the next episode.

Pictured below is the cleaned and disinfected corpse.

This is a true story about my efforts to resurrect an old family friend.

Over the next several weeks I will unveil some of the unusual procedures that we’ve employed in a series of operations that will eventually return it from the grave to the waiting arms of a loving family.

In the spirit of Halloween, I hope that you will follow this disturbing and (I hope) entertaining saga. Show your love my friends, leave a comment and sign up to follow future posts on this story. 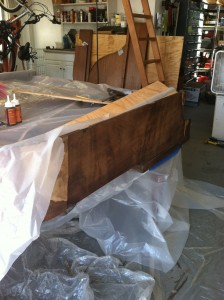