Continuing with our skeletal reparations after joining the inner layers of the rim (see Episode 3), we sculpted a rather large section of new bone (hardwood) to replace the missing outer layer.  Its installation required an elaborate series of clamps and braces (as shown in the picture below) to secure it to the previously joined inner layers. 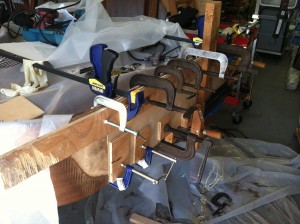 We then refined our work using various compounds, abrasives and shaping tools to obtain a smooth and contiguous surface upon which to graft  a new layer of skin.  The resulting platform (shown below) may appear odd, because of the obvious tonal variants, but I assure you that it was meticulously formed and perfectly even to the touch. 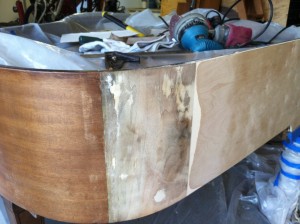 Finally, we painstakingly grafted a new layer of skin onto the substrate and were relieved to have achieved an acceptably presentable profile that our subject would be able to live with quite comfortably without embarrassment.  As you can see here, it is readily apparent that the new dermis was scavenged from another creature – though it be of the the same species, it was from a different region and exhibits obvious variants in tone and color.  However odd the contrast may at first appear, remember that this side of the piano normally faces the wall. 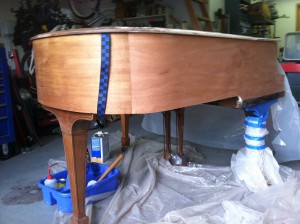 Satisfied with the results, so far, we now focused our attention on the severely mutilated face – and quickly realized that our work had just begun, for this would be the most challenging and tedious aspect of our resurrection.  Behold the Corpse! 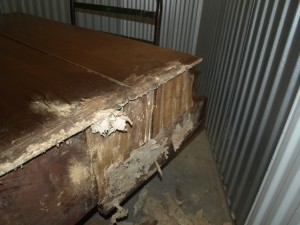 If we could not achieve an aesthetically acceptable result, the monster would be too hideous to present in public and forever destine to hide in shadow.

As was the case with our efforts to reconstruct the body proper, this procedure would require countless hours of intricate dissection and remodeling.  In spite of our careful planning and execution at each step of the process, we encountered many unforeseen problems and set-backs that necessitated multiple surgeries and much disappointment.

Without reservation I now admit to having succumbed, on several occasions, to a profound despair which brought many sleepless nights and terrifying dreams of ghoulish apparitions which caused me to severely doubt the veracity of my commitment to continue our experiments.

Discussions with the family, however, eventually persuaded me to persevere;  the choice of living without their friend – or enjoying the pleasure of his company (even though he would look strange) was an easy one for them.  As anyone with a damaged and disfigured friend or relative will readily attest: The heart always wins this argument.

In the next installment I will present, in vivid detail, the facial reconstruction process and examine what I expect many of you will consider to be amongst the most outrageous decisions that were made in our haste to resurrect this old friend.