After many years of struggling to recuperate patients with terminal and calamitous ailments, I was recently confronted with a dilemma that I would soon realized to be an opportunity for making a monumental paradigm shift in the science to which I have devoted my life.

The beloved friend and companion of a family that I have know from childhood was recently discovered in a flooded basement infested by rats. The corpse had been decimated and devoured by the water and rodents over several months and was barely recognizable. The amount of deterioration and decay was astonishing. My initial viewing of the corpse left me pale and retching.

Saddened and dismayed by the loss of their trusted family retainer, I committed myself to investigating and rectifying any inequities that may have been at the root of his demise. Unfortunately, my efforts to solve the crime that resulted in this horrifying scene proved fruitless.

Because of their trust in me and my selfless devotion to finding a solution to the perplexing cause of his demise, the remains found their way to my facility for internment preparations.

On the slab in front of me was the most decrepit and mutilated specimen I had ever encountered. The flesh was flailed and peeling from its bones. The noxious stench of rot was overwhelming and almost brought me to my knees. Tears flowed from my eyes at the sight of it and emotions welled from my heart that I had not felt in the many years since the death of my parents.

I was, at first, inclined to relinquish the corpse to the incinerator and be done with it, as I had so many times before.

On this occasion, however, for reasons that I can’t explain, I made a decision that may haunt me the rest of my days. I chose, in my arrogance, to attempt what no man had done before. . .

To resurrect the dead!

Whatever your impression may be of this little story (which I hope you enjoyed reading),I assure you that it’s true to a word. The victim, however, is not human nor was ever animate.

Pictured below is the subject of my tale as it was first presented to me. The series will continue over the next several weeks as I reveal the unusual and unprecedented processes that we chose to use in bringing this little beast back to life.

In the spirit of Halloween, I hope that you will follow us as we attempt to revive our old friend. 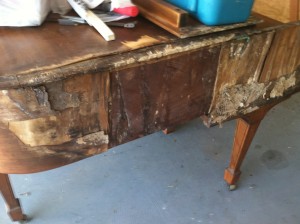